Last Friday, Mr. Prew, Mr. Forder and Miss May took a group of year 6 children to a mixed football tournament at Oxford City FC. The children were split into 2 teams and faced each other in the opening group game with Phil and Jim’s team 1 narrowly prevailing 1-0 in a very tight affair.

Team 1 then went on to win a further 3 games to make it 4 wins out of 5 and top group A. Team 2 finished 3rd in the group losing just once more on route to the quarter finals where they came up against a strong all boys Windmill team who edged the game to progress to the semi-finals.

Team 1 went on to beat East Oxford and Great Milton in the ¼ final and semi-final to set up a final against Windmill. After taking the lead due to some great teamwork and perseverance, they unfortunately went on to lose the game 2-1, finishing runners up.

Overall, it was a very well contested tournament with both teams playing some excellent football throughout. 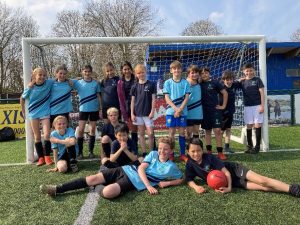