This term our topic has been about the Romans. We’ve mostly studied Julius Caesar. One fact we have found out about him is that his adopted son was the first Roman Emperor. We have enjoyed making the shields and learning how to march like a Roman for example the tortoise march. This week we have learnt some poems about them and will perform them to each other.

By Ismaeel and Izzy (4CG) 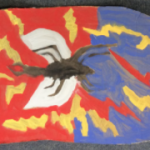