We thoroughly enjoyed our World at War wow day to kick off this term’s topic studying the world wars. The classroom was transported back to September 1939 when World War II had just broken out. We listened to the announcement of war and some reports of evacuation. Then, we made our own gas masks and ID cards and had to carry them around with us all day, just as children living through the war had to. We had a practise air raid drill and tried to memorise German and British aircraft to be able to tell the difference. We imagined what it would be like to be evacuated and then wrote letters to welcome evacuees to our school. Finally, we compared life as a child during the war in Britain and Germany by looking at a typical school day in Nazi-Germany and comparing propaganda posters from both countries. It was a busy day!

Anna said, ‘I liked that in the morning we came in and had an air raid siren and had to get under our desks, as if it was a real air raid drill. I enjoyed comparing the German and British airplanes and it was interesting to see how similar some of them were. I found out that the children had to have gas masks with them all the time in case of a gas attack, even in the classroom!’ 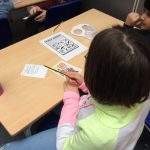 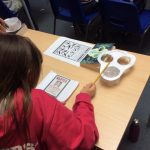 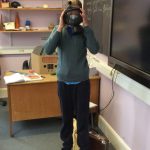 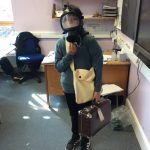 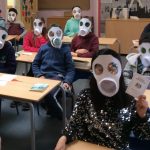 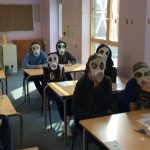