On Tuesday 1st May, 11 girls from Netball Club took part in a Netball match against a Year 7 team from Cherwell. It was a very tight match but in the end the result was 3 – 1 to us!

We were all very happy that we had won, and to celebrate, we ate chocolate! We were also quite surprised we had won because they were a year older than us.

“I feel the team played very fairly and that the coach umpired well.” – Sophie D.

“The defenders played amazingly, trying to catch the rebounds and keeping the ball away.” – Saskia.

The player of the match from Phil and Jim was Sophie R (who was also captain), as she played really well and shot all of our goals. The Cherwell team played well and showed good sportsmanship. 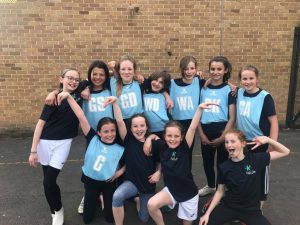